Imagine for a moment that World historical and political geography had been very different and that your own particular country in which you live, freely and in peace, wherever that may be, had been attacked by vastly superior forces from the dictatorships of Nazi Germany and The Soviet Union. You had then seen your country overrun, the population slaughtered en-mass, including friends, family, relations and that you and your Government had escaped to another country to fight with foreign allies for your freedom and the peace of the world. The whole planet then unites and engages in a World War under the initial banner of defence of your culture and borders. Your country eventually fields the fourth largest military force in the conflict and fight in almost every theatre of action around the globe.

At the end of hostilities and the complete annihilation of the enemy that first attacked your country, the whole Nazi dictatorship Navy surrenders to your commanders. But then your country is politically betrayed by foreign leaders, your country is handed to other invaders, indeed the dictatorship of The Soviet Union, part of an alliance that first attacked your country, then changed allegiance after Nazi Germany attacked them and who even now after the war has ended, imprison and murder the Polish resistance army that first welcomed the allied `liberators‘, but who attempted against the will of a dictator, to initiate a democratically run, free country. You and your Government in Exile cannot then return home, though the war is won and you are on the ‘winning’ side. The fourth largest Army in the War, is yours, but is excluded from a victory parade through the streets of London with it’s other comrades in Arms, as that might offend a foreign dictator that is now in complete control of your land.

So, this would not be a pleasant thought for anyone from any nation. Betrayal, deceit, Political manoeuvring, lies. That is a situation that a whole army of Poland has had to live with in reality since 1945. In almost every country around the world there is a remnant, individual or community, that is at heart, a piece of pre-war Poland and an army destined never to return home or parade in victory through the streets of their own capital city. 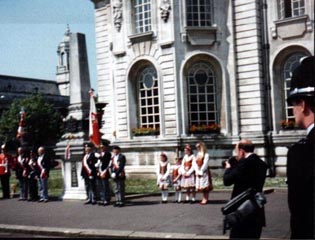 This is based on a 16/17th century Polish Cavalry helmet and birds feathers, which were attached to wooden frames and worn on the back of Hussars armour in order to scare enemy horses.