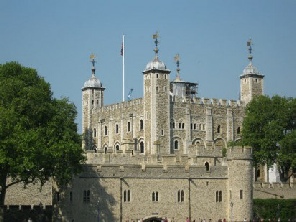 The Tower of London

1066 The battle of Hastings

Harold Hardrada the king of Viking Norway who also laid claim to the Angleland throne and allied with Trostig (brother of Harold II King of Angleland) preempted Williams invasion and had landed North to meet with Trostigs forces from Scotland.

On 25th September 1066 Harold II defeated this combined Viking force and slew both leaders at Stamford Bridge. Two days later William of Normandy invaded the south and as the news reached Harold II on 1st October at York, Harold II force marched his army from York to secure London in five days and then again 58 miles in three days to meet this second invasion head on with his forces, engaging battle at Hastings on the 14th October 1066 while not waiting for reinforcement of his tired force. It became a grave error of judgement.

Although it was a very closely fought affair and run thing, the Angleand shield wall finally broke under the onslaught of the Norsemen cavalry and Williams tactics.

The Battle changed the entire social structure of England (Angleland) forever, with Harold II dead, his army destroyed and his entire political leadership defeated and killed. The Saxon Thegns were replaced by the Norman Barons and a million Saxons ruled by 10,000 Normans.

Angleland fell, but the stubborn Welsh lands did not and a huge Castle building program was began by the Marcher Lords. In London William the conqueror built his definitive monument to victory. The Tower of London.